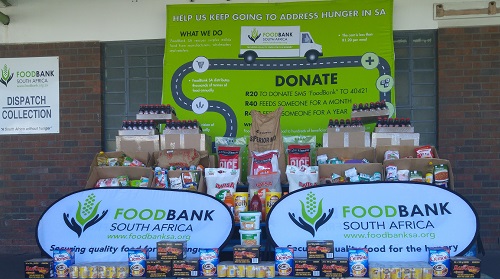 “Hunger is more than a lack of food. It’s a terrible injustice, unfairness and inequality,” Ban Ki-moon

World Food Day is a day of action against hunger. On October 16, people around the world come together to declare their commitment to eradicate hunger in our lifetime. Because when it comes to hunger, the only acceptable number is zero.

Starting on the 5th of October 2015 and running until World Food Day, FoodBank SA challenged the public to join the fight against hunger by taking part in a World Food Day Food Drive campaign. Pick n Pay partnered with FoodBank SA for the duration of the campaign by making a selection of stores available as food donation drop off points.

To top this off, Checkers kicked off an in-store Food Drive nationally on the 16th of October, as part of an initiative in support of FoodBank SA and World Food Day. Checkers matched the quantity of non-perishable food items donated to FoodBank SA by the public.

Through the World Food Day Food Drive, FoodBank SA has already received over 13,000 kilograms of food, with even more food donations coming in. The food will be distributed to the 450 beneficiary organisations supported by FoodBank SA who collectively feed over 110,000 hungry people daily.

As part of an awareness campaign, FoodBank SA staff and volunteers took the city of Cape Town by storm and ran a road side campaign at different busy intersections, creating awareness of the 11 million people in South Africa who experience hunger daily and showing the public that a donation of just R15 can provide 12 meals.

FoodBank SA would like to thank everyone who supported the World Food Day Food Drive. May you continue to spread the spirit of Ubuntu and make World Food Day an everyday celebration.

A very BIG thank you to the following companies for supporting our World Food Day Food Drive campaign.