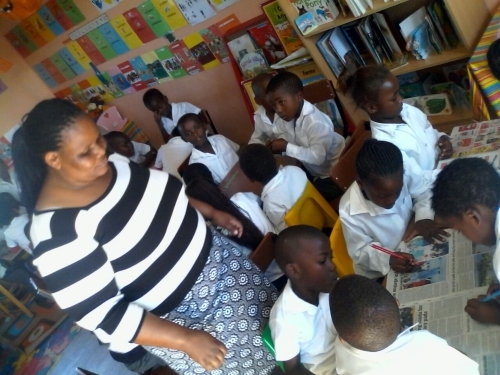 Early in 2016 Nompumelelo, one of the teachers at Inzame Zethu Educare, was awarded a certificate for exceptional work, for the actions that she took to assist three young children in the Harare area of Khayelitsha.

A few months ago Nompumelelo identified a mother struggling with alcohol abuse. The mother of three children: one young boy aged six and three year old twin girls was regularly leaving her children alone in the house without food or adult supervision. Nompumelelo regularly visited their home to assist the mother in dealing with her addiction.

Unfortunately, one weekend, Nompumelelo heard reports that the children had been pleading for food from neighbours and that the mother had not been home for several days. She went to fetch the children and took them back to her home to wash and feed them. Nompumelelo quickly reported the situation to Ma’mbhele, the principal and founder of Inzame Zethu Educare and with the help of social workers they removed the children and placed them in a nearby emergency foster home. The Inzame Zethu Educare team ensured that the six year old boy began attending pre-school, as he had never attended any form of schooling previously. “The teachers report that he is doing well at the school and is enjoying his time there.” said Nompumelelo.

The twins are also attending pre-school at Inzame Zethu Educare and have been seen by a doctor to ensure that they are healthy and well taken care of. The children appear to be happy and have slowly settled into their new living environment and are enjoying the nutritious meals served at school each day.

Inzame Zethu Educare offers a safe and loving environment, providing quality child care and education for children aged 2 to 6. The Educare nurture’s a child’s total development through its structured daily programmes and creative activities and believes that by fostering a sense of self-worth in each and every child, they help them to learn to respect and care for others in their ever-expanding world. FoodBank South Africa supports Inzame Zethu with nutritious food to feed their 141 beneficiaries daily

“The work that we do as an organisation would be nothing if we had not been able to feed our beneficiaries. We are able to do the work we do through the support we receive from FoodBank South Africa. We encourage FoodBank SA to continue with the work there are doing.” said Nompumelelo.