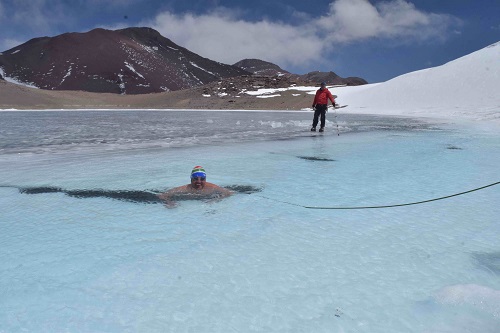 Madswimmer donate R10 000 to FoodBank SA after completing the highest swim in the world.

Madswimmer is an NPO whose members complete daring swims in order to raise funds for various charities. Since its creation 7 years ago, they have raised almost R6 million, which they use to change people’s lives. Dedicated and just a little crazy, they go through challenging expeditions to raise funds for those who need it most.

On the 5th of December the Madswimmer team completed the challenge of the highest swim in the world.  They accomplished this at an altitude of 5909m above sea level, high up in the Andes Mountains on Lake Tres Cruces Norte.

This expedition was fraught with challenges, the original plan to swim on top of Volcano Ojos del Salado at 6400 m did not pan out as the pool was solidly frozen. They changed strategy on day 3 of the trip and headed to Mt Tres Cruces, summited the crater at 6014 m on day 8 and swam the same day.

The ice-covered layer of the lake was 30 cm thick and the chain saws they carried with were too weak to cut open a swimming lane at that altitude. Eventually the team had to revert to pickaxes and hours of hard manual labour on the day of the swim and that after 8 days of tough hiking and extreme cold (-18 deg C at night) and at an altitude where it is literally hard to breathe. Any name for this group other than MADSWIMMER would simply have been inappropriate.

Madswimmer supports 12 charities and FoodBank SA feels honoured to be one of those. Madswimmer receive fundraising from corporates and individuals for their daring stunts and expeditions. They made a donation of R10 000 to FoodBank SA. We want to say thank you to the generous Madswimmers. Your donation will help FoodBank SA facilitate the provision of over 8,400 nutritional meals for hungry south africans.