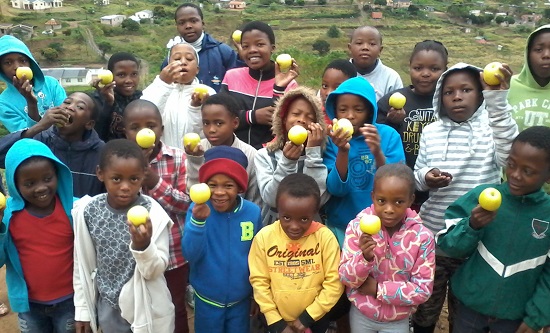 We’ve recently teamed up with the Sizokhula HIV/AIDS Affected and Vulnerable Children’s Care and Support Centre to help aid their efforts in alleviating the problem of food insecurity in Redhill, Durban.

After discovering that children in the community were going to school hungry, a former educator was inspired to get involved and make a difference, and in 2010 founded the Sizokhula HIV/AIDS Affected and Vulnerable Children’s Care and Support Centre.

According to the organisation’s Kate Mhlongo, children were coming to school having not eaten for days while others were unable to attend school as they felt obligated to take care of their sick parents, grandparents and siblings. Various circumstances and the lack of education and guidance also led to teenage pregnancies and substance abuse.

The organisation, which cares for these vulnerable children and those affected by HIV/AIDS offers:

Since inception, the beacon of hope that is Sizokhula now supports 330 children. These children are motivated, have a better outlook on life and attend school regularly with a significant improvement in school performance.

“The children feel loved and wanted and are able to make informed decisions, which helps in preventing HIV/AIDS infection, teenage pregnancies and substance abuse. Sizokhula is unlocking their talents, bringing joy and actualising their potential while improving their social skills”, says Kate.

Thanks to its partnership with FoodForward SA, the Sizokhula HIV/AIDS Affected and Vulnerable Children’s Care and Support Centre is able to feeds its children daily, five times a week. “FoodForward SA has helped our organisation so much! We unfortunately do not receive any funding, which is our biggest challenge and prior to donations received from FoodForward SA, we survived on discarded food from shops. FoodForward SA is making a great difference”, said Kate.

Donations to @foodforwardsa make a meaningful and

Onwards and upwards! . Our Cape Town branch is sa

Going to the movies this weekend? @sterkinekor has

Fruits and vegetables are crucial for optimal huma

Community feeding programmes (19%) and centres for

Like @mowcs_sa, we also believe that "If we all do

Truworths made us do it… and we loved it! . Last

“Freedom (n.): To ask nothing. To expect nothing

There’s a good chance that you know just how muc