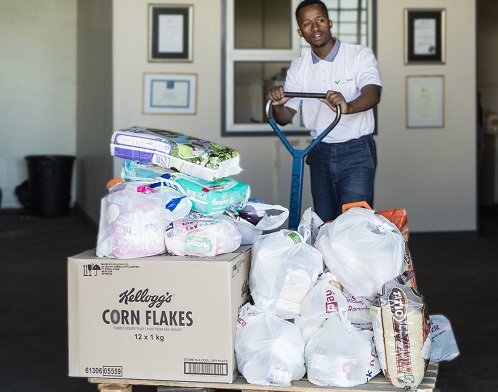 Is the voice of the poor and hungry manifesting in service delivery protests?

South Africa has one of the highest unemployment rates in the world, along with more than 13.8 million people living without the security of regular meals. Last year alone, there were nearly 14 000 service delivery protests across South Africa. One could argue that these protests are the result of deeper underlying issues such as hunger, unemployment and the rising fuel and food prices. Many of the protests are a reflection of anger, resentment and intolerance, which seem as the only “effective” mechanism for that collective voice to be heard. Despite this, South Africa produces enough food to feed the entire population. Yet, one third of all food produced ends up in landfills.

Oxfam’s 2015 report on Food Insecurity states that 25% of our population are food insecure now, while a further 25% are at risk of food insecurity. Even more concerning is the high rate of unemployed youth – a staggering 45%. This figure is in line with Statistics South Africa’s recent quarterly labour force data showing that unemployment is at 25,5%. But, when looking at the broader definition of unemployment – which includes discouraged job-seekers (those able to work but either not actively looking or could not find work that match their skills), then the unemployment rate increases to an alarming 40%.

The reality is that at least half our population can’t afford to buy food, or can’t afford to buy the amount of food they need to sustain themselves and their households. Poor people spend between 50 – 80% of their income on food, and are more vulnerable to food and fuel (transport; electricity) price increases. As a result, little is left to spend on other basic needs like education or mounting household debt. This growing affordability crisis, if not appropriately and comprehensively addressed and led by the government, will have dire social and economic consequences for our country for generations to come. The current widespread drought will most likely see food prices increase dramatically in the coming months, which will impact severely on the urban and rural poor, and will force many to compromise their nutrition by eating smaller varieties of food (less dietary diversity), eating less nutritious food (malnutrition) and skipping meals (under-nutrition).

There is no doubt that government programmes to address food insecurity are inadequate, and should do more on all fronts. One solution involves government partnering with organisations like FoodBank SA in creating and implementing a comprehensive plan to seriously address food insecurity. Government’s failure to act now and act appropriately will certainly lead to further and more violent protests, or worse.

FoodBank South Africa is already seeing the impact caused by the food insecurity crisis. In the past year we have had numerous applications for food assistance, and as a result, increased the number of Beneficiary Organisations (BO) by over 100%. We now assist nearly 500 BOs nationally, who in turn serve 115,000 beneficiaries throughout South Africa each day, with a further 100 applications for assistance waiting to be processed.

In order to position ourselves to adequately meet this growing demand for food, FoodBank South Africa has:

Foodbanking is a cost-effective and environmentally friendly method to address the food insecurity problem over the short to medium term. Join us and be a part of the solution.

Support FoodBank SA today and partner with us as we address hunger among the food insecure poor.