Bringing supporters, chefs, athletes and airlines together to feed the hungry 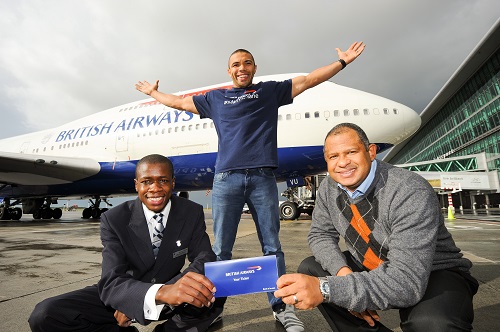 To drum up support and awareness, FoodBank SA took to social media in February with its #RecipeChallenge. The campaign encouraged supporters to purchase specially developed recipes for R40, the amount needed to feed a hungry person for a month, prepare one of the recipes and upload a photo on social media, and in return stand a chance to win two return business class tickets to London with British Airways.

Back in July 2013, rugby legend and FoodBank SA supporter Bryan Habana took part in British Airways’ promotional campaign by accepting the challenge to race against its new A380 Airbus. Watch the epic British Airways – Man vs Plane video here:

In support of the FoodBank SA cause, British Airways offered two return Club World (business class) tickets worth more than R60 000 on condition that the promotional video hit two million views. The target was reached, and the winner of #RecipeChallenge was Lorna Huisamen who jetted off to London in May to visit friends.

We at FoodBank SA thank every one of you who participated in the #RecipeChallenge and a special thank you to chefs Ishay Govender, Pete Goffe-Wood, J’Something and Dominic Pain who provided their recipes for supporters to purchase, create, and share on social media.

When you page through this @oldmutualsa Staff Payr

Today, on World Day for Audiovisual Heritage, we w

A good financial planner will tell you that donati

Pasta and meatballs are always a winning combinati

Today marks the 75th anniversary of the @unitednat

Winemaker @markleroux85 and the team at @waterford

Are you up for a challenge? . Starting today, we n

With just over 1000 beneficiary organisations acce

It is International Chefs Day and we are delighted

Thank you, @Nedbank, for joining us on World Food

Thank you, @engen.sa, for joining us on World Food

Thank you, The Institute of Risk Management South

Thank you, @Pepsico, for joining us on World Food

Happy World Food Day, everyone! 🍏 . Our food he

Our decisions carry much power. . What we do (and

There are still many more food supply chain role p