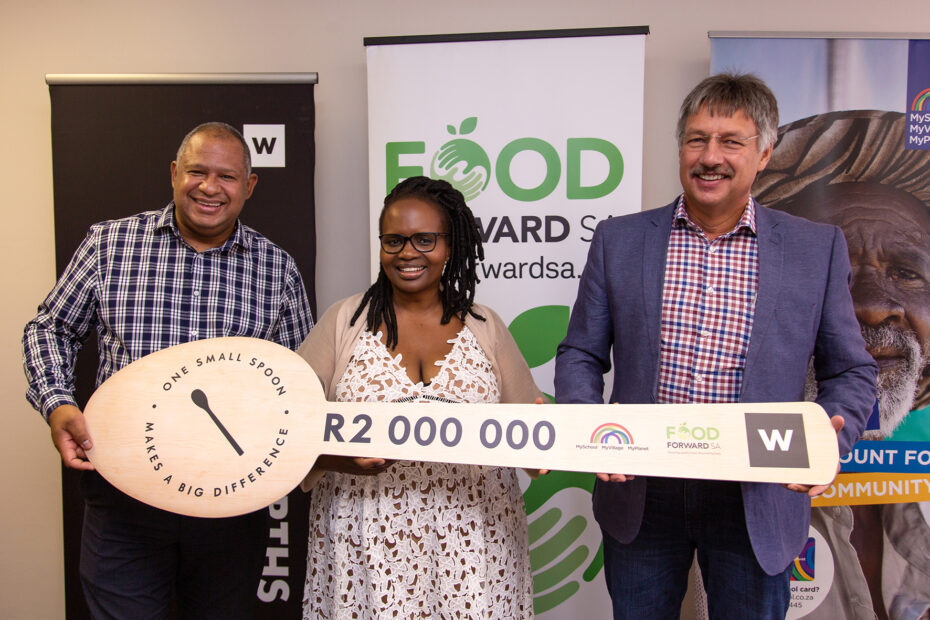 Christmas is a distant memory already, but thanks to Woolies and their customers, meals will be given to those who need it most throughout 2019.  The Woolworths One Small Spoon Christmas campaign united customers to help raise R2 million to help FoodForward SA unlock 2.5 million additional meals this year.

Woolies customers participated in the Christmas giving campaign by swiping their MySchool MyVillage MyPlanet cards over Black Friday sale days and the festive period.   Funds were also raised through their purchases of their favourite Christmas goodies such as mince pies, cherry genoa cake and chocolate balls, as well as popular every day foods like ready-to-cook chickens and roasting vegetables.  The cause-related lines were marketed with the One Small Spoon campaign logo, and each item purchased unlocked one meal.  There was also a Christmas reusable shopping bag on sale, and each purchase unlocked 12 meals and some customers chose to support the campaign by making FoodForward SA one of their MySchool MyVillage MyPlanet beneficiaries and swiping their cards in-store.

Zinzi Mgolodela, Woolworths Director of Corporate Affairs says, “A huge thanks to our customers for their support of this campaign.  This is a sign of commitment to addressing the food insecurity challenge in South Africa and that the One Small Spoon concept is something that they take to heart.  R2 million was an ambitious goal but when we are all committed; a small gesture has a ripple effect with deeper impact.  We are delighted we were able to facilitate a contribution towards boosting FoodForward SA’s impact in 2019.”

With its long history of supporting food security initiatives, Woolworths launched the One Small Spoon initiative last year on World Food Day.  The campaign is focused on promoting zero hunger in South Africa, and aims to inspire widespread, customer support through its key message that the fact that more than 14 million South Africans are at risk of going hungry every day* is everyone’s problem and we can make a difference.

One third of all food produced in South Africa goes to landfills**.  The work of FoodForward SA not only gets quality edible surplus food to those who need it, but also helps to reduce this alarming food waste.  In 2018, Woolworths partnered with FoodForward SA to help unlock 1.2 million meals per year over a three year period.  The 2.5 million meals unlocked by the One Small Spoon Christmas campaign is in addition to this commitment, and it was the first initiative to empower Woolies’ customers to join forces on the journey to zero hunger in the country.

“We are so grateful to Woolies and their customers for their support,” says Managing Director of FoodForward SA, Andy Du Plessis.  “We are thrilled that Woolies’ customers have joined hands through the One Small Spoon Christmas campaign to help us move towards our vision of a South Africa free from hunger.  When we partnered with Woolworths last year we were delighted to receive an additional R3 million over a three year period.  They said then they would open doors for us, but at that time we had no idea of the extent of the Woolies family and their influence.  Other than this generous additional donation, we are also working with Woolies’ suppliers who have come on board to donate post-harvest surplus for us to distribute or process into shelf stable products. This crucial partnership between Woolies and FoodForward SA will assist us significantly toward our goal of growing from helping 250,000 people to 1 million people per day within the next five years.”

As FoodForward SA gets an additional 3.7 million meals to the hungry this year, the One Small Spoon aims to grow and increase its momentum so that customers can easily help raise funds to combat hunger and improve food security for all South Africans.

For more information to support the movement towards #zerohunger in South Africa visit www.woolworths.co.za/onesmallspoon.