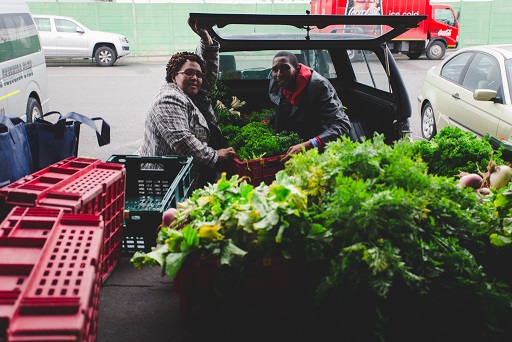 FoodForward SA partners with major food retailers and manufacturers to rescue edible food before it goes to waste. This food is then distributed to the 600 beneficiary organisations we assist nationally, one of which is Sizizihlobo Community Soup Kitchen.

Sizizihlobo Community Soup Kitchen was established by Maureen Mabanga in 1996, from a tiny shack that catered for people living with HIV/Aids. The soup kitchen then shifted their focus to catering for people living in poverty who don’t have access to nutritious meals. Through FoodForward SA the organisation is able to offer a meal every Tuesday and Thursday to 70-80 people.

Maureen receives her food from FoodForward SA, which includes staples and fresh produce as well as snacks, which she gives to the children of the community.

Maureen is grateful for the support she receives. ‘FoodForward SA has helped me and the community so much’ says Maureen.

The donations received from FoodForward SA allow Maureen to achieve the vision of her soup kitchen, building a South Africa without hunger. Through her hard work and determination she is able to address the major problem of hunger in her surrounding communities.

FoodForward SA is happy to provide ongoing support to their beneficiary organisations who shares a common goal of enriching the lives of disadvantaged South Africans.